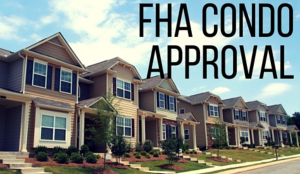 The U.S. Department of Housing and Urban Development (HUD) has finally published the long-awaited final revisions to the Federal Housing Administration’s (FHA) condominium project approval rules. The FHA does not originate loans for purchasing condos, but rather insures these loans for borrowers who might not otherwise qualify for traditional financing requiring a 20% down payment. In practice, these changes will give more people access to FHA-insured financing, which should in turn provide many Californians with a better chance of purchasing a condo. The new rules go into effect on October 14, 2019.  Some of the most significant changes in the FHA regulations include:

• The FHA is once again authorized to approve and insure up to 10% of individual loans in a condo project (formerly called “spot,” and now called “single-unit” approval), as long as the condo association as a whole is financially stable.  The FHA may also insure these loans if the condo project itself has not obtained FHA approval, which can be an expensive and cumbersome process for many condo associations.

END_OF_DOCUMENT_TOKEN_TO_BE_REPLACED

It is no secret that community associations are often targets for embezzlement. But they are not alone. Newspaper articles tell us that it happens to various types of businesses and organizations, even attorneys and lawyer/bar organizations. Fraud and embezzlement seems more likely to occur when no one is watching those that control the checkbooks. And unfortunately, many many condominium, stock cooperative and planned development boards of directors become too trusting and they don’t keep an eye on what their manager or treasurer are doing.

To ensure that community associations are better protected, the California legislature passed AB 2912, acknowledging that associations are susceptible to fraud and embezzlement, and that more is needed to completely achieve the goal of protecting community association funds. Pay close attention as there are new requirements for both managers and boards amending two sections of Civil Code and adding three new ones. AB 2912 made the following changes to the law:

END_OF_DOCUMENT_TOKEN_TO_BE_REPLACED

By the Community Association Attorneys at SwedelsonGottlieb

• Email Consent to Document Delivery — Civil Code §4040 (Individual Notice), which allows for individual delivery of notices and other documents by email if an owner consents to this in writing was amended to allow an individual owner to permit/revoke consent to allow individual notice by email. While most attorneys thought that an email was considered a writing, this amendment eliminates any confusion.

END_OF_DOCUMENT_TOKEN_TO_BE_REPLACED 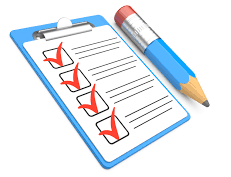 SwedelsonGottlieb annually updates and publishes its Disclosure and Notice Checklist as a resource for Managers and Board Members of California Community Associations. The updated Checklist is 14 pages (there are a lot of things that California community associations are required to give notice of or disclose) and sets out what disclosures and notices California community associations are to provide to homeowners, when and how they are to be provided, as well as other considerations. Included is information regarding the Code requirements for the Annual Budget Report, the Annual Policy Statement, Fiscal Year End Disclosures, and other Additional Disclosures/Notices. We have included information regarding the recent changes to Civil Code Section 4041 relating to the solicitation of owner mailing addresses, etc. and the required New Management Disclosures. Follow this link to download your copy of this important resource. 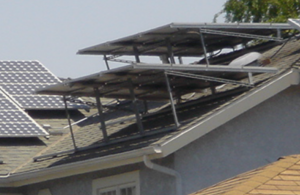 According to CAI’s California Legislative Action Committee, there is still time to stop AB 634, a bill that impacts a condominium association’s ability to control the placement of solar panels in common interest developments. BUT YOU MUST ACT TODAY BEFORE THE GOVERNOR SIGNS THIS BILL INTO LAW.

CAI reports that “AB 634 has passed the state legislature and, if signed by the Governor, will eliminate local association-approved rules and replace them with statewide mandates that allow a single homeowner to monopolize a common area roof with solar panels for their sole benefit.”

It also allows the installation of panels without regard for their impact on our community’s architectural guidelines, suitability for that particular building or roof, or any adequate protections from property or water damage.

PLEASE click here to easily email Governor Brown and ask him to VETO this bill that will hurt all of those living in our communities!

Below is SwedelsonGottlieb’s letter to the Governor:

END_OF_DOCUMENT_TOKEN_TO_BE_REPLACED

Title VIII of the Civil Rights of 1968, also known as the Fair Housing Act (“FHA”), is a federal law which prohibits discrimination in housing and housing-related services due to race, color, religion, sex, national origin, disability, and familial status. Because the FHA applies to entities that set terms and conditions for housing and provide services and facilities in connection with housing, it applies to HOAs and other community associations. By now, most HOAs across the country are already aware (or should be aware) that, in 2016, the U.S. Department of Housing and Urban Development (“HUD”) amended its federal housing regulations to firmly establish association liability for discriminatory conduct by its Board, directors, employees, and even by residents. Particularly concerning to HOAs are the new regulations regarding discriminatory harassment and third-party liability, which may also be the most difficult sections to understand for Board members and management.

Suppose that Happy Acres HOA’s on-site manager Mark has openly expressed his fondness for homeowner Helga by whistling and making cat-calls at her when she passes his office on her way to the gym. He has asked her out on dates several times, even after she declined and explained that she was married with three kids. One day, when Helga emailed Mark to request guest passes for her son’s birthday party, he responded by saying, “come see me in my office in your gym clothes and we’ll see what we can ‘work out.’”

END_OF_DOCUMENT_TOKEN_TO_BE_REPLACED 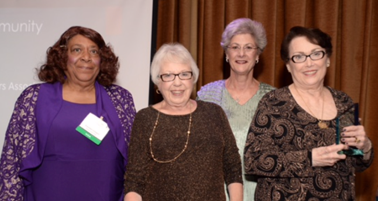 Board members Betsy Koehler, Lois Riopelle and Carolyn Cooper were present to accept this prestigious award from Chapter President-Elect Joanne Pena, which was given to this Association because of the hard work and effort the Board undertook to pass a large special assessment for needed common area repairs and renovation work.

This Board undertook the task of pulling the membership together after several failed attempts to obtain member approval and financing for a $4 million dollar renovation project due to years of deferred maintenance. By not giving up on getting the members to see the benefits of investing in their Association and in turn their units, this Board went above and beyond for the betterment of their Association and its homeowners. The Board was successful in the passage of the special assessment and obtaining the homeowners approval to authorize the Association taking out a loan to help the owners pay the special assessment for the work. To date, the Association has completed the repairs to their roof, chimneys, siding and trim, replaced elevated walkways, waterproofing planters and decks, termite treatment, and installation of drought-tolerant plant material. SwedelsonGottlieb Senior Partner Sandra Gottlieb and associate Kevin McNiff worked with the Board to achieve it’s goals. Harbor Gate Homeowners Association is managed by Scott Management,Torrance, California whose efforts were also essential to the Board’s success. www.ScottMgmt.com 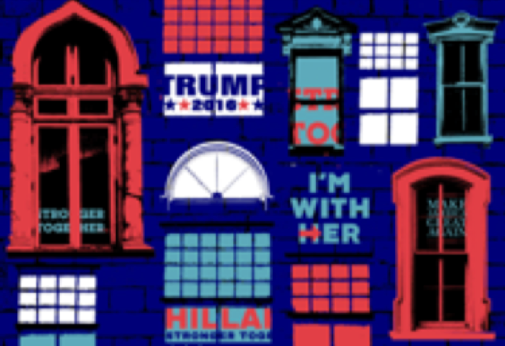 Considering how contentious the campaigns for president have been for the election of our next president, it is amazing that we have not received more requests from our California community association/HOA clients for advice on how to deal with political signs. The fact is that we have generally seen less political signs posted on properties then I remember in past elections. With respect to the presidential election, that may have something to do with people not really wanting to out themselves as a supporter of one candidate versus another.

Don’t get me wrong as we have received a few requests for advice from some of our association clients, just not as many as I remember from past presidential elections. In all but one of the matters that we have been requested to consult on did we find that the homeowner did not have the right to post their sign. At one association, the board did not want the owner to have their sign posted prominently in the front window of the owner’s condominium. One of the board members forwarded to me the attached article that appeared in the New York Times indicating that in New York, homeowners do not have the right to place political signs in their windows or on their property unless permitted by their association. The article (follow this link) questioned whether a resident at a community association in New York has a constitutional right to post a political sign on their property. Apparently in New York, a community association can have rules prohibiting political signs or other types of signs placed in the windows or elsewhere, depending on the associations rules.

END_OF_DOCUMENT_TOKEN_TO_BE_REPLACED 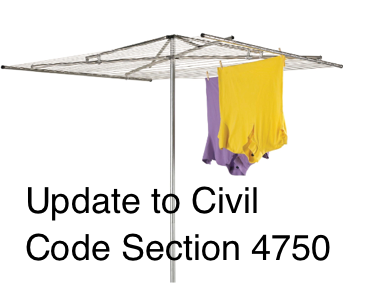 California law now limits a community association’s ability to restrict the use of clotheslines and drying racks. Effective January 1, 2017, Civil Code 4750.10 invalidates any provision of a governing document that effectively prohibits or unreasonably restricts an owner’s ability to use a clothesline or drying rack in their backyard. This law reflects California’s tendency toward energy conscious legislation, and in fact, the law originally referred to clotheslines as “solar energy systems.”

As applied to community associations, the new law has some important limitations. For example, it only protects an owner’s ability to use a clothesline in a backyard designated for exclusive use. So, the law does not sanction an owner’s ability to use clotheslines in other areas, such as their front yard or a shared rear yard. Further, the law explicitly states a balcony, railing, awning, or other part of a structure or building does not qualify as a clothesline. So, the new law does not protect owners who string wet clothes over their balcony railing to dry.