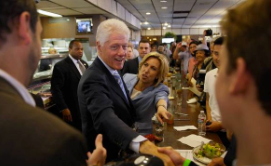 While it’s easy to say that this is a problem that impacts community associations, the fact is that many people just don’t care enough to vote even when it comes to the elected officials that run their city, state or their country. Voter apathy is not just a community association problem. And that is too bad, as the right to vote is a privilege; it is how each citizen has a say in how our government is run.

Los Angeles recently held a mayoral primary. The ballot was for more than just the primary for candidates for the final election for Los Angeles’s new mayor. I know, as I voted. Yet, only 20.8% of the registered Los Angeles voters actually voted. This would not even be enough to constitute a quorum at most community associations. I had every intention of writing about this previously. And I was motivated to write about this issue again when I saw comments from Former President Bill Clinton who was recently in Los Angeles stumping for one of the mayoral candidates. According to an article in the Los Angeles Times, Clinton “castigated the voter turnout in the mayoral primary as ridiculous.”

Quoting Clinton (from the Los Angeles Times article), “[w]e can’t tolerate… the kind of low turnout you all have in these mayors races,” referring to the 20.8% of registered voters who cast ballots in the March primary. He is quoted as then saying “it’s ridiculous. There are too many people in Los Angeles, of all ages, that have a big stake in the future.”

This apathy doesn’t apply to just the recent mayoral primary. I am shocked after each election when the percentage of voters is announced and see how low the turnout was. I always vote. I want a say in who is governing my city, state or nation. How can I complain about what’s happening unless I vote? It just does not make sense that voters are so apathetic.

Voting is critical to democracy. It is difficult to overstate the importance of voting. Yet voter participation in the United States ranks near the bottom of the list internationally. In California, roughly 69 percent of residents who are eligible to vote are registered. Yet typically, half that percentage vote in most elections. And only 20% vote in the lesser important elections. It is safe to say that our government is elected by a small minority of citizens.

The same applies to community associations. Most community associations are run by board members who were elected by 25% of the owners. For most people, their home is their single largest investment. Because their community association controls the property to a large extent, you would think that an owner at a condo, HOA or stock cooperative would care about who is on their association’s board, making the important decisions regarding maintenance and repair, the rules, etc.

Electronic voting has been shown to encourage voter participation. There is currently pending in the legislature AB 1360 that will allow owners to opt into electronic voting. And if you are a member of a community association, participate and vote when there are elections. It is your right, and it is important.