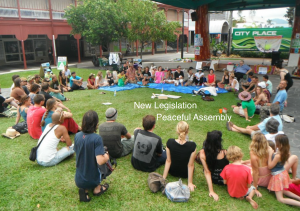 Effective January 1, 2018, Civil Code Section 4515 was added to the Davis-Stirling Act to protect certain rights of political speech and peaceful assembly within the boundaries of a common interest development.

Senator Bob Wieckowski originally presented new Civil Code Section 4515 to California’s legislature as Senate Bill 407. Remarking on his proposed legislation, Senator Wieckowski stated that it “will prevent HOA boards and management from denying basic rights to their residents” as “Boards have fined and threatened legal action against homeowners for simply exercising basic political free speech rights. Millions of Californians live in these associations and SB 407 is needed to prevent these abuses.” While we have no experience with these types of “abuses,” we understand the basis for this new legislation.

As enacted by California’s legislature, Civil Code Section 4515 (which became effective January 1, 2018) protects political speech and assembly rights by invalidating any provision of an association’s governing documents (which includes rules) that prohibits the following:

• Peacefully assembling or meeting, at reasonable hours and in a reasonable manner, for purposes related to common interest development living, association elections, legislation, election to public office, or the initiative, referendum or recall process.

• Inviting public officials, candidates for public office, and representatives of homeowner organizations to meet with members and residents and speak on matters of public interest.

• Canvassing and petitioning the members and residents for purposes related to the topics listed above.

• Distributing or circulating, without prior permission, information about the topics listed above or other issues of concern to the members or residents, at reasonable hours and in a reasonable manner.

Civil Code Section 4515 also invalidates any provision requiring a member or resident to pay a fee, make a deposit, obtain liability insurance, or pay the premium or deductible on the association’s insurance policy, in order to use a common area for any of the meetings described above.

As you can see, Civil Code Section 4515 provides broad protection for political speech and assembly. Further, the topics afforded protection by this new law span from any issue of concern to the association’s members to general matters of public interest. However, it appears that this new law has some important limitations.

Civil Code Section 4515 does not require any homeowners association to open its facilities to the general public. Rather, the right to assemble is limited to “members, residents, and their invitees or guests.” This distinction is important, as opening these facilities to the general public would likely necessitate compliance with the Americans with Disabilities Act (ADA).

According to the Legislative Counsel’s Digest (a reference that accompanies a proposed law and explains it to the California legislature), Civil Code Section 4515 would require “an association to adopt rules that ensure access to the common area meeting space … during a campaign, at no cost” as well as require “the adoption of rules that ensure … equal access [to association media] is provided to all candidates and members advocating a point of view.”

An example of a common governing document provision that may run afoul of Section 4515 is the requirement that members pay a fee, make a deposit and/or purchase liability insurance before using a common area facility (Rec Room or Clubhouse, for example) for a private gathering. Importantly, Section 4515 does not require an association to waive these requirements for all events, only for those meetings where protected topics are discussed. Of course, this leaves open the possibility that some members will abuse 4515’s protections by claiming that every birthday party, family reunion, or other gathering is held to discuss political topics.