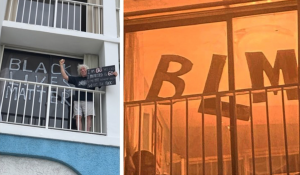 The property manager told the newspaper that reported this story that he supports the owner’s message, but had to enforce the association’s rules. “Our rules and regulations say not to display anything on the windows,” he says. ” [Condos are] shared use. What goes for one goes for all.” The manager added that one owner complained that if the 86 year old protestor could write “Black Lives Matter” on his glass door, he would post a “Trump Forever” sign on his own window.

Apparently in Florida, owners cannot say what they want on their windows or from within their units. Follow this link to read the news story from the Miami New Times. And while I question how far the condo board at the Florida association will actually take this matter considering what is happening across the country, in California this would not likely be an (or at least it shouldn’t become an) issue.

In California, we have Civil Code § 4710 that addresses the display of noncommercial signs or flags. This Code section does not allow an association to have a rule or restriction in the CC&Rs or Rules that prohibits noncommercial signs, posters, flags, or banners from being displayed “on or in a member’s separate interest [unit or home], except as required for the protection of public health or safety or if the posting or display would violate a local, state, or federal law.”

This statute specifies that the noncommercial sign, poster, flag, or banner may be made of paper, cardboard, cloth, plastic, or fabric, and may be posted or displayed from the yard, window, door, balcony, or outside wall of the separate interest, but may not be made of lights, roofing, siding, paving materials, flora, or balloons, or any other similar building, landscaping, or decorative component, or include the painting of architectural surfaces. It also limits signs and posters that are more than nine square feet in size and noncommercial flags or banners that are more than 15 square feet in size. Follow this link to read the statute in its entirety.

So, if Florida had a similar code section, the 86 year old Miami Beach condo owner referenced in the story above would be able to keep his signs as they appear to fit within the size restrictions of the statute and are displayed on the windows of his unit. The California statute does say that the sign may be made of certain materials, but does not say that the list is exclusive or that a resident cannot create the sign by writing on the window itself. And the owner in Florida sort of addressed that issue when he replaced what he painted on the window with cardboard cut-outs that spell out “BLM” that were hung from the door on the inside of the condo using fishing line. This would or should definitely be permitted in California.

So, if this were in California, the 86 year old protestor could keep his BLM sign and his neighbors could post their Trump (or Biden) signs, so long as they otherwise complied with Civil Code § 4710.

David Swedelson is a senior partner at SwedelsonGottlieb, a firm that limits its practice to the representation of community associations throughout California. David can be reached at dcs@sghoalaw.com.