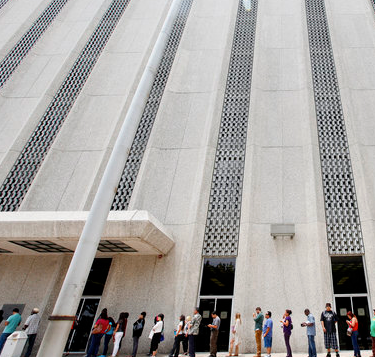 A few months ago I reported about the State’s budget cuts that are significantly impacting California’s court system. Unfortunately, and despite recent reports that the State’s financial resources are better than expected, Los Angeles County Court officials recently reported the elimination of an additional 500 jobs. As a result of these changes, court reporters are not being provided for most civil cases, lines at the courthouse are growing longer as there’s less staff to provide services like getting files, copies of documents, etc. and courtrooms are closing.

I am currently waiting (or as we lawyers call it: “trailing”) for courtrooms to become available for trials in two separate enforcement lawsuits. It may take weeks or longer before we can actually start trial. This only adds to the cost of the litigation and makes the parties anxious as they wait.

In one case, the Judge told us that there are 3 courtrooms in Santa Monica, not a big courthouse, where there are judges, but no court staff. Without staff, these judges cannot hear trials. So they are doing settlement conferences.

Whereas most cases used to take one to two years to be litigated, tried and/or settled, we are anticipating that we will be looking at 2 to 3 years or more. Before the budget cuts, we could schedule a hearing on a motion within a month or two. Now, some courts are making us wait three or even up to six months for an opportunity to present the motion to a court.

The budget issues and layoffs are not limited to the Los Angeles County Court system (the largest in the country). To date, 175 courtrooms have been closed across the state, over 50 courthouses have closed, and as many as 30 courts have stopped providing court reporter services. The results have been harsh.

What does this all mean? It means that board members and homeowners at California condominium, stock co-ops and planned developments are going to have to be patient with their attorneys as their lawsuits slowly grind through the court system. Don’t be surprised if there is nothing happening on your case for months. In one lawsuit we are involved in, one of the parties filed a demurrer, a motion challenging a complaint filed by a homeowner, and was given a hearing date of January 2014, more than six months. Nothing much will happen in that case pending that motion.