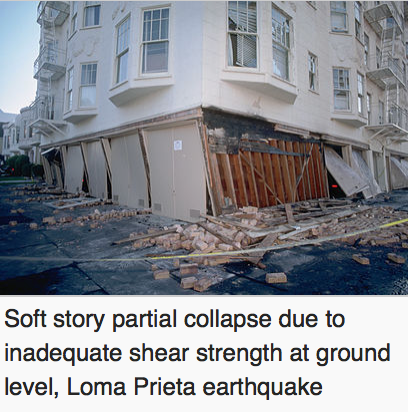 The list is out, and an article in the LA Times reports that neighborhoods in the San Fernando Valley, Hollywood and the Westside will feel the biggest impact from Los Angeles’ new law requiring the retrofitting of wood-frame apartment buildings to better withstand a major earthquake, according to a Times data analysis.

According to the article, these apartment buildings (often referred to a “soft story” building), which feature flimsy first floors that often serve as parking spaces/car ports, became popular after World War II as Los Angeles was spreading north into the Valley and west toward the ocean.

“But they’ve also proved to be vulnerable to violent shaking. Buildings collapsed in the 1989 Loma Prieta and the 1994 Northridge earthquakes, including one apartment building where 16 people died.” 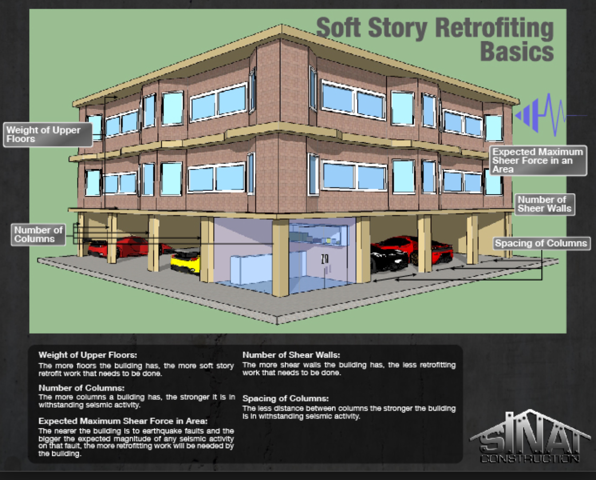 According to Wikipedia, “[a] soft story building is a multi-story building in which one or more floors have windows, wide doors, large unobstructed commercial spaces, or other openings in places where a shear wall would normally be required for stability as a matter of earthquake engineering design. A typical soft story building is an apartment building of three or more stories located over a ground level with large openings, such as a parking garage or series of retail businesses with large windows.

Buildings are classified as having a ‘soft story’ if that level is less than 70% as stiff as the floor immediately above it, or less than 80% as stiff as the average stiffness of the three floors above it. Soft story buildings are vulnerable to collapse in a moderate to severe earthquake in a phenomenon known as soft story collapse. The inadequately-braced level is relatively less resistant than surrounding floors to lateral earthquake motion, so a disproportionate amount of the building’s overall side-to-side drift is focused on that floor. Subject to disproportionate lateral stress, and less able to withstand the stress, the floor becomes a weak point that may suffer structural damage or complete failure, which in turn results in the collapse of the entire building.”

Follow this link to a depiction from the LA Times that portrays how these soft story type of buildings can collapse during an earthquake.

“Los Angeles building officials sifted through tens of thousands of city records and walked block-to-block to identify these structures. Owners of each building have been put on notice, and a number of them have already begun the retrofitting process. The retrofits can cost as much as $130,000, which has sparked concerns from owners and residents feeling the pressure of rising rents and a housing crunch.”

It will be interesting to see how well Los Angeles is going to be able to enforce the new retrofit requirement. After the Northridge earthquake in 1994, Santa Monica took strong action to address its soft story buildings.

I recall dealing with Santa Monica’s retrofit requirement after the Northridge earthquake, as I remember some of our Santa Monica condominium association clients being required to retrofit their soft story buildings. I did some research. One article I found indicated that when the ordinance was adopted, the Santa Monica City Council ordered its staff to find vulnerable wooden apartment and concrete buildings and require the owners to strengthen or demolish them. According to one article, Santa Monica hired experts to help, and the city council “stood firm even when property owners protested the costs.”

“…But as shock over the deadly earthquake faded, so did Santa Monica’s resolve. After several years of aggressive work, City Hall quietly stopped enforcing what were the strongest municipal quake regulations in California. Today, a top city official admits that he can’t even find the list that the city created of buildings that might be at risk.”

So, while the list is out, it remains to be seen how well Los Angeles building officials will be able to enforce the retrofit requirement. Condominium associations may have no choice but to retrofit. The associations will have to disclose to the owners that their association is on the retrofit list. Owners will have to disclose this to buyers. The fact that a building is more vulnerable to damage including collapse will most certainly impact the ability of owners to sell their units. I expect that those soft story buildings will be retrofitted. Time will tell.

So, is your condominium association on the soft story retrofit list? Again, follow this link to find out.

David Swedelson is a condo lawyer and HOA attorney and senior partner at SwedelsonGottlieb, a firm that specializes and limits its practice to condominiums, homeowner associations and stock cooperatives throughout California. The firm does not represent individual owners.