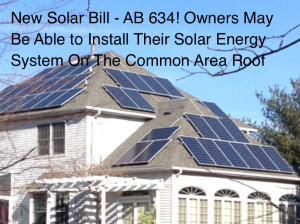 As you may have heard, the Governor signed into law new legislation that now changes a California condominium’s associations ability to prohibit an owner from installing a solar energy system on the common area roof. AB 634, which went into effect on January 1, 2018, amended several provisions of the California Civil Code to set forth language that further clarifies what condominium associations can and cannot do with respect to the installation of an owners own solar energy system on a common area roof and exclusive use common.

As originally enacted, Civil Code § 714 and § 714.1 already prohibited associations from imposing unreasonable restrictions against the installation of solar energy systems on common areas and on a separate interest owned by another owner. AB 634 amends Civil Code § 714.1 to further clarify that associations are prohibited from doing the following: