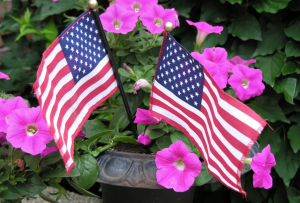 I was forwarded an article on flying the American flag at community associations that appeared in the Wall Street Journal which motivated this blog post. According to the article, Flag Day commemorates the adoption in 1777 of the U.S. flag. The article (follow this link) goes on to say that “for condominium dwellers, celebrating could prove challenging. On account of condo by-laws dictating the appearance of units, it isn’t always Yankee Doodle Dandy when members wish to fly the American flag. Courts have addressed disputes of all stripes.” Spoiler alert, and as I will explain below, California has a statute that protects the right of an owner to fly a flag. But there are limits.

The article that motivated this post tells us that Larry Murphree placed small American flags in potted plants outside the front door of his condominium in Jacksonville, Fla., in 2013. The condo association objected, citing its guidelines that limit display of the flag to an area near the garage door. Facing a $1,000 fine, Mr. Murphree filed suit, arguing that the Freedom to Display the American Flag Act, a federal law that prohibits condo associations from imposing certain restrictions on the placement of U.S. flags, protected his right to adorn his greenage with the red, white and blue. In Murphree v. Tides Condominium at Sweetwater (2014), a federal court ruled against Mr. Murphree, concluding that the 2006 law has no enforcement mechanism.

The article tells us about Michael Readnour, who in 2005 erected a 20-foot flagpole adjacent to his condominium in Columbus, Ohio. His condo association objected and Mr. Readnour sought to have a court permit the two-story mast under the state’s American Flag Act, which specifically prevents a condo association from prohibiting a flagpole used to display the American flag. But in Readnour v. Blendon Reserve Condominium Association (2009), a Buckeye State judge concluded that the legislation still allowed a ban on flagpoles that are “out of proportion to the architecture and decor of the condominium community.” Apparently the Court felt that Mr. Readnour’s 2-story flag pole as out of proportion.

In Board of Managers of Clinton West Condominium v. Desmond (2018), a condo association sought a preliminary injunction to remove an American flag and pole that Edward Desmond had attached to the exterior of his unit. Mr. Desmond argued that the flag “is not a plant, planter or shoe sitting on [his] window sill,” but serves to honor those, including some in his family, who fought in the nation’s wars. He sought protection under a state law that exempted compliance with any condo by-laws that preclude display of an American flag not larger than 4 by 6 feet. A New York court ordered the banner removed, finding that the statute safeguarded Mr. Desmond’s right to display it only within the confines of his unit.

Allen Gerber had more success. A Florida federal court concluded that his condo’s prohibition against displaying the American flag, except on designated holidays, was akin to a racially restrictive housing covenant. This made it state action, which trod on the Air Force veteran’s First Amendment rights. In Gerber v. Longboat Harbour North Condominium (1989), the court sought to prevent a “curious ordering of values,” noting that “had Mr. Gerber chosen to burn his flag rather than display it in a dignified manner, public spirited lawyers would have appeared to help him protect his constitutional right to burn old glory. But to proudly display the United States Flag Mr. Gerber was forced to commence a federal lawsuit at his own expense.”

The article that I reference above was written by Randy Maniloff, an attorney at White & Williams LLP in Philadelphia and an adjunct professor at Temple University’s Beasley School of Law. He concluded his article by saying: “Welcome to the condo. Now pledge allegiance to its by-laws.” Funny sort of.

In California, the Civil Code deals with the flying of the American flag such that what these owners referenced above faced would not necessarily be an issue. Specifically:

And the flag must be made of fabric, cloth, or paper and be displayed from a staff or pole or in a window, and does not mean a depiction or emblem of the flag of the United States made of lights, paint, roofing, siding, paving materials, flora, or balloons, or any other similar building, landscaping, or decorative component.

And note that if an owner sues their association for not allowing them to fly their flag, if they prevail they will likely be awarded their reasonable attorney’s fees and costs.

Happy Flag Day. If your California Community Association needs legal advice or counsel, contact us at info@sghoalaw.com or call us at 800-372-2207.