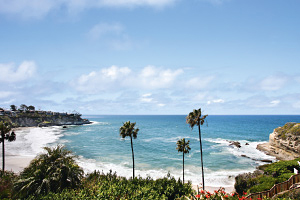 The City of Laguna Beach has for a long time had an ordinance that provided homeowners in that city some protection of their ocean and mountain views. According to a recent LA Times article, the City adopted a new view ordinance in 2014 that allows its residents “to use the date they purchased the home or Nov. 4, 2003, [the date used in the prior law] whichever is earlier, to establish a record of a view, usually through photographic evidence. Offending vegetation must be within 500 feet of the claimant’s property line and at least 6 feet tall to be subject to a claim.”

The city’s new ordinance requires a property owner claiming an obstructed view to first attempt to work out a solution with his or her neighbor on whose property the trees/vegetation are located before the city has to get involved. If the homeowners can’t reach an agreement to resolve the view issues, then the property owner pays $500 for a city-hired mediator to step in. This is a great idea and one that we have recommended to many of our clients. Mediation has proven to be a very effective tool for resolving owner-to-owner disputes such as view obstructions. According to the Times article, “[o]f the 25 view mediation applications (the city was expecting more, see below), a mediator resolved five cases while parties in two other cases worked out issues by themselves. Other cases are pending.”

“If mediation doesn’t work, the aggrieved landowner may file a view-restoration claim with a $630 price tag. Once a resident files a claim, city staff visits the site, interviews the property and vegetation owners and schedules a public hearing where the restoration committee considers the evidence. Since June, the committee has deliberated four claims.”

While California community associations cannot charge a fee (unless their CC&Rs allow for a fee), boards can still hold hearings and make these kinds of determinations. In fact, many homeowner association CC&Rs mandate that boards review and make a binding determination of the view impact dispute.

The Times article reports that “[t]he hearings have helped some neighbors reach a compromise. During a hearing in July, for example, a resident agreed to remove a 50-foot-tall ash tree that a neighbor said blocked views of the ocean and Catalina Island. At other times, neighbors have failed to agree, such as a recent hearing when a property owner seeking to restore a view rejected a neighbor’s proposed planting plan in fear the trees would eventually obstruct sightlines.”

“Councilman Kelly Boyd said the overall process is an improvement. ‘Most people aren’t going past a mediator, which is good,” Boyd said. “There was a worry that 50 to 60 people would go crazy. In the past, someone could say, ‘Hell with you,’ and the view would be blocked. Now people are working it out, which is a great thing.'”

The Times article states that “many predicted that the city would be deluged with claims from residents seeking to restore sightlines of the ocean or surrounding hillsides lost to overgrown trees and other vegetation on a neighbor’s property.”
Statistics obtained recently from the city tell a different story.

Since the revised ordinance took effect in January 2015, the city has received 25 applications from residents seeking to restore their views, far fewer than anticipated. The legislation requires property owners to attempt a solution on their own, or with help from a mediator, before the city-appointed View Restoration Committee considers the matter at a public hearing.”

According to the Times article, the Laguna Beach City Council this month is scheduled to consider adopting a separate ordinance related to city-maintained trees and vegetation that will outline a process for residents wishing to restore lost views due to trees planted on public property. Many homeowner associations have language in their CC&Rs or should consider adopting some language to address the association’s own landscaping and view obstructions.

SwedelsonGottlieb has assisted many California community associations with their view obstruction issues and disputes. Contact our office if your association needs help addressing view obstruction disputes or adopting rules or CC&R provisions to deal with same.

David Swedelson is a senior partner at SwedelsonGottlieb, the head of its litigation team, an HOA attorney and condo lawyer. The firm represents associations only. Contact David via email: dcs@sghoalaw.com