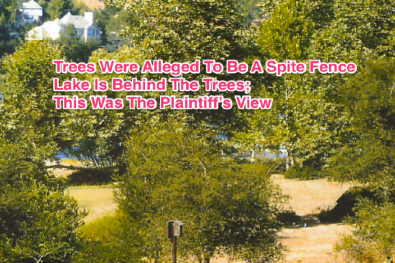 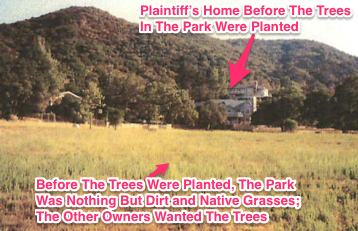 [NOTE: In the 1986 case of Pacifica Homeowners Association v. Wesley Palms Retirement Community, the California Court of Appeal concluded that “[a]s a general rule, a land owner has no natural right to air, light or an unobstructed view and the law is reluctant to imply such a right.” However, “such a right may be created by private parties through the granting of an easement or through the adoption of conditions, covenants and restrictions …”]

More importantly, none of the trees that the plaintiff complained were obstructing her view are on or near her property line, and as a matter of law, those trees were not a spite fence.

To learn more about what a spite fence is and how it could be used as a claim against a homeowners association, follow this link to an article that we prepared that formed the basis of our trial brief in this case.

After hearing all of the evidence, the jury’s verdict was in favor of the association. The jury found that there was a row of trees, but they did not find that the trees unnecessarily exceeded ten feet in height. We were talking about trees in a park, after all. Thus, there was no spite fence, and the case was over. A good result for the firm’s client.

SwedelsonGottlieb senior partner David Swedelson tried the case to the jury. Senior associate Joan Lewis-Heard handled most of the pre-trial work and prepared the motions in limine which were granted, as well as the jury instructions and verdict forms.

David Swedelson is a senior partner at SwedelsonGottlieb and heads up the firm’s litigation and trial team. He is a condo and HOA legal expert. He can be contacted via email at dcs@sghoalaw.com.