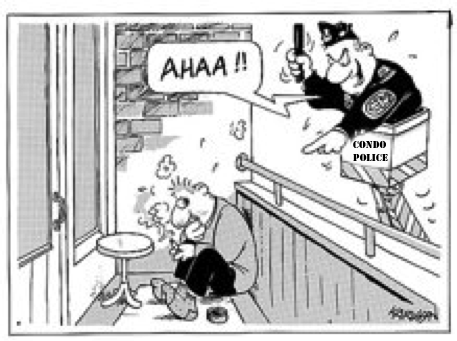 We recently published an article on secondhand smoke regarding its impact at condominium associations and how it can constitute a nuisance. Since almost every community association’s CC&Rs prohibit noxious activity, this is a fairly common and accessible means of addressing the issue. However, enforcing a nuisance claim has its challenges and drawbacks, namely, the subjective nature of defining a nuisance makes enforcement difficult, and the fact that each instance of a nuisance must be addressed individually does not make prosecution of these claims all that easy. But this is not to say that these claims are not enforceable or that California community associations should not take action, when appropriate, to eliminate nuisances.

A budding trend among community associations, or at least a topic of significant consideration, is to amend the CC&Rs to include the adoption of a community-wide smoking ban, restricting all homeowners from smoking anywhere within the Association, including their own units. While the adoption of such a ban has been historically difficult, in many areas, particularly in major cities of California, the climate is ripe for change.

For some time, smoking has been banned in many office buildings, restaurants, and public spaces. California was the first state to implement a statewide smoking ban in 1995, and many others have followed suit. In other instances, cities have gone further. The City of Pasadena hopes to implement its no smoking in units ban in 2013. The City of Santa Monica is considering a similar proposed new ordinance.

While the existence of a smoking ban in the CC&Rs provides an Association with a lot of leverage when it comes to preventing homeowners from smoking, such an amendment is not without disadvantage.

Most notable is the difficulty in getting such an amendment passed in the first place. Unless a homeowner is already experiencing an issue with another homeowner’s smoking, they are unlikely to care enough to vote in favor of a ban. Further, they may see such a ban as an impediment to their ability to market their unit, thinking future buyers would be hesitant to purchase a unit in an association that prohibits smoking. Most likely, getting a smoking ban adopted will require educating homeowners on the benefits it may offer, and assuring them that it is in the Association’s long-term interests. Since nonsmokers outnumber smokers nearly 10 to 1, a smoking ban is more likely to attract, rather than deter, potential buyers.

Before seeking to amend the CC&Rs to include a smoking ban, community associations should consider whether such a ban is necessary or even appropriate under the existing circumstances. If homeowners’ complaints regarding smoking haven’t been a serious issue, then it may be preferable to continue addressing complaints individually as nuisance violations. If, on the other hand, such alternative means of addressing smoking complaints have been exhaustive yet unproductive, then a smoking ban may be appropriate and will better withstand judicial scrutiny.

Another concern is that a smoking ban would place a heightened expectation on the Association to enforce a rule in situations it might otherwise be able to ignore. For many smoking-related nuisance complaints, the issue exists only between two homeowners, and the association may rightly choose to abstain from involvement in a “neighbor-to-neighbor” dispute. While the same may be true of a smoking ban violation, having such a clearly defined restriction makes it all the more important to have a clearly defined enforcement policy, specifying that the association may, but is not required to, enforce the ban, and that homeowners are free to enforce the ban themselves through the court system. However, even with such a policy, associations must be diligent in their enforcement to avoid effectively nullifying the ban, and they must not be arbitrary in their enforcement to avoid claims of discrimination. As required by California law, and specifically the Business Judgment Rule, the decision of when to enforce such a prohibition must be made with care, in good faith, and in the association’s best interests.

Assuming an association successfully amends the governing documents to include a smoking ban, it must then contend with the possibility of it being challenged by the courts. While California law dictates that a properly adopted amendment to the CC&Rs is presumed reasonable, there is a dearth of case law dealing with smoking bans, making the courts’ response to a homeowner challenge less predictable.

To address this unpredictability, amending associations might consider making exceptions to the smoking ban, such as allowing current homeowners to be grandfathered in, or at least providing current owners a clemency period to adapt to the ban, and make accommodations as necessary. Such exceptions might also aid associations in getting a smoking ban approved by the homeowners, as it is less likely to encounter resistance in the first place. Keep in mind, however, that such exceptions should apply only to the current homeowners or residents occupying the affected unit; once a new tenant moves in, or a new owner acquires title, the ban should apply to them.

While the existence of smoking bans remain the exception rather than the rule, I suspect that this might start to reverse as the public opinion against smoking, and trend towards limiting it, continues to grow. We already have some California community association clients that have recently amended (with our firm’s help) their CC&Rs to ban smoking. We are now working on compliance and enforcement. Associations would be wise to stay mindful of this change, and consider the implications when enforcing or amending their existing governing documents.