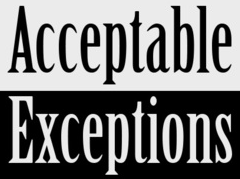 In a blog post by Donna DiMaggio Berger, a Florida Community Association Attorney, she discuses exceptions or variances granted to owners. Apparently in Florida they deal with some of the same issues we do. As Donna states, many boards want the leeway to grant exceptions when it comes to certain restrictions in their association’s CC&Rs, such as leasing or altering units or exclusive use common area, performing maintenance and allowing certain types of architectural changes or improvements. We see the same thing here in California.

But often boards grant exemptions or variances without thinking about all of the ramifications. As Donna states, what many boards fail to understand is that any time an exemption or exception is granted, they are creating a precedent which may render their restrictions unenforceable in the future.

Donna states that “if there is no mention in the governing documents that a board has the right to grant an exemption, then a board should not even contemplate doing so.” I am not sure that I agree with Donna as frankly, I do not see many if any community association governing documents that actually even reference exemptions or as we call them here on the west coast, variances. However, I do think that boards need to be very careful when it comes to granting variances, as giving a variance to one owner may mean that the board has to give that or a similar variance to another owner.

And I agree with Donna where she goes on to say that even if an association’s governing documents provide such authority, a board still needs to discuss with legal counsel what the pros and cons are when it comes to exercising that right.

Donna describes “a classic example of a situation where a hardship exemption might be equitable,” where an owner’s tenant dies two weeks into a lease term in an association which restricts leasing to only one time in any calendar year (I cannot say that I have seen this restriction in California, but this may still be applicable to a situation where the CC&Rs state that if an owner loses a tenant, that the owner goes back on the waiting list). “A board may very well feel that the intent of the restriction to keep the community safe from transient rentals will not be accomplished by applying the restriction under those circumstances.”

And a board may decide that it is unfair to send the owner who lost his or her tenant after two weeks back to the waiting list and instead allow that owner to rent the unit with a new tenant.

Boards do need to avoid the suggestion that they are granting variances for those owners they like and not for those that they don’t. Boards should consider setting out in the rules how it will consider and grant exemptions or variances.

In addition, if the board will allow a certain type of window, screen door or other exterior modification to be installed by owners, the board should set this out in the association’s rules.

The board told me to sue this owner. We made a number of attempts to settle both before and after filing the lawsuit. The board was unwilling to accept any settlement proposed by the owner despite my telling them that they had already allowed four different window styles. I told the board that they could lose the lawsuit because they had not had a consistent policy on windows, which is exactly what happened. The judge ruled as I predicted and told the board that as they had allowed 2 modifications and had 3 styles of windows at the association. Based on these facts, the judge found that the association had waived the right to tell the owner that her windows were non-conforming.

David Swedelson is a California condo lawyer and HOA attorney. He can be contacted via email: dcs@sghoalaw.com